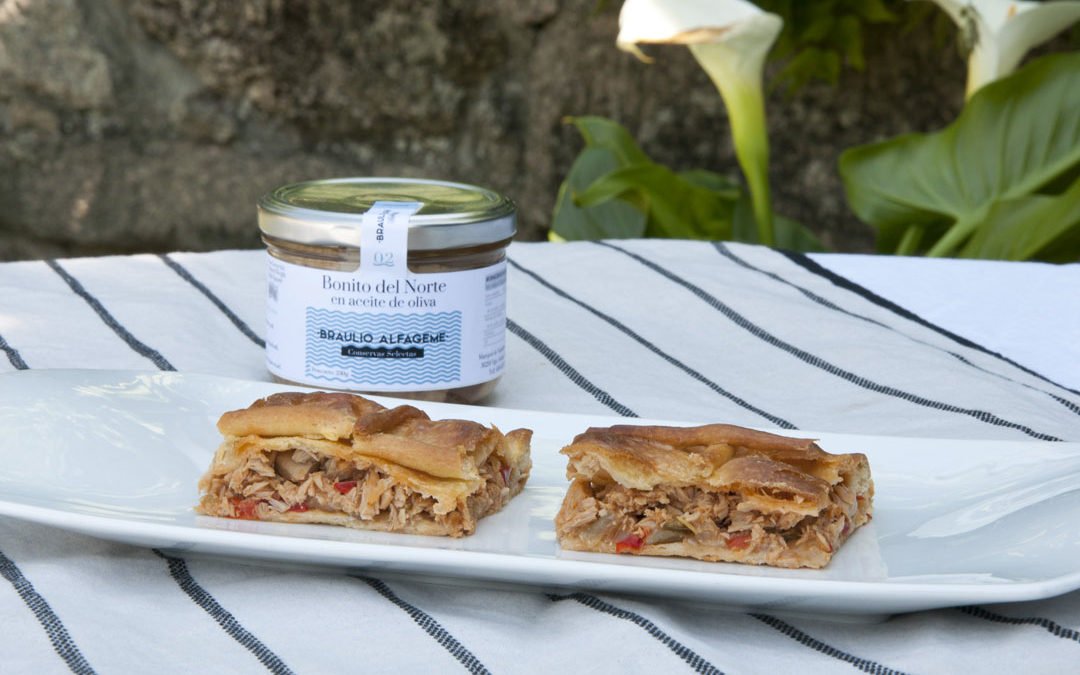 Galician empanada with bonito from the North by Braulio Alfageme

These are the ingredients for 4 people, you can always adapt the amounts if you want a bigger or smaller pie.

We start by making the sofrito , for this we chop the onion in julienne strips and the peppers into small pieces. In a saucepan we put the oil to heat and when it is hot we add the onion and peppers, leaving them to cook for twenty minutes over medium heat taking care not to toast them, they should be transparent and soft. Drain the oil from the sofrito into a container, allowing it to cool. This will be used for the dough later.

We add the tomato, if it is a prepared sauce we let it cook for three or four minutes, if they are natural tomatoes, we poach them together with the vegetables for twenty minutes over low heat . We add the nice well drained of its oil and reserve until it cools.

To make the dough in a bowl add the flour, crush the yeast on one side until it is crumbs, it is not necessary to dissolve it in water, and pour the salt on the opposite side of the bowl. We add 200 grams of the oil from the cold sauce as well as ¾ parts of the water that must be warm or at room temperature.

Mix with a ladle until the ingredients are combined so that a mass is formed, to which we will rectify with water if we see it necessary. Turn over to a lightly floured worktop and knead with your hands, do this kneading process for ten or fifteen minutes until you achieve a dough with the approximate texture of pizza or bread dough. Form a ball and place it in a floured bowl and covered with a cloth in a warm place for one hour, until it approximately doubles in volume.

We preheat the oven to 180 degrees with heat up and down . After the time has passed, return it to the counter and lightly tighten it with your knuckles to degas. We will divide the dough into two parts, roll them again, let them rest for five minutes so that they lose their strength and we will stretch them into two circles, one slightly larger than the other. We place one of the parts on top of a baking tray with parchment paper.

We distribute the filling on this base, cover with the other part and seal the edges making a kind of fold, which we can crush with a fork to make it safer. With kitchen scissors we open a hole in the center or we prick with a fork in all its surface and we paint the surface with beaten egg and milk.

Bake for forty-five minutes or until we see it golden.

After all these steps, you will have the Galician empanada with bonito from the North by Braulio Alfageme ready.